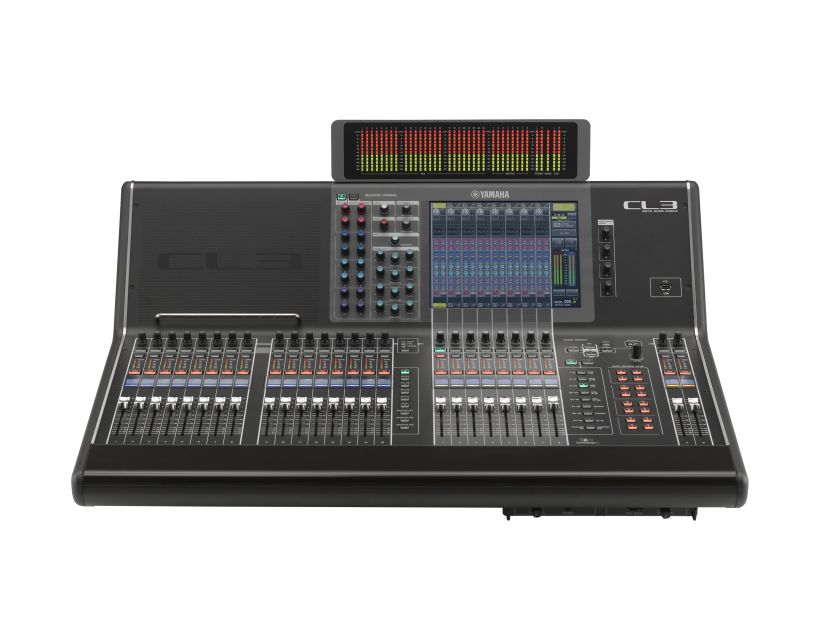 The pursuit of perfection is ongoing and will probably never end, but along the way Yamaha has introduced a number of innovations that have become industry standards offering performance and familiarity that discerning users continue to demand. By definition, “standards” are best kept as they are. With evolutionary refinements, of course.

Yamaha CL series digital mixing consoles represent a new level of refinement. They offer an evolved experience in accessible mixing, plus sonic purity with sound shaping capabilities that will give the most imaginative engineer unprecedented creative freedom. The CL series embodies the leading standards in live sound in their most advanced, most expressive form.

A creative console for expressive engineering.

Every engineer, artist, and audience agrees that sound quality is the bottom line. That’s a given. Through thorough analysis, review, and refinement of every detail of the circuitry and technology used, Yamaha CL series consoles deliver naturally superior sound plus a comprehensive range of “coloring” options that give the sonic craftsmen who will use them extraordinary creative freedom. The signal processors provided are plentiful and of the highest quality, including extraordinary Portico 5033/5043 EQ and compressor devices that bring Yamaha VCM technology together with the legendary talents of Rupert Neve. The platform is pure and natural, so the engineer can create and deliver the ideal sound.

A truly useful sound reinforcement console is one that can keep pace with the rapidly and dramatically changing demands of live sound applications. Efficient, intuitive operation is essential. Yamaha’s acclaimed Centralogic concept is the core of a refined user interface that offers a new, unprecedented level of operating efficiency in the CL series, from visual feedback right down to the form and feel of the faders and controls. The CL consoles are also ready for seamlessly integrated remote control and offline editing via an Apple iPad® or other computer. Control is familiar and intuitive, while at the same time offering extensive freedom.

Network capabilities are rapidly becoming fundamental and indispensable in today’s fast-paced world of digital live sound. CL series consoles feature separate console and I/O rack components that communicate via the Dante™ network audio protocol, allowing fast, efficient design and deployment of capable systems from the most basic to the dazzlingly complex. The ability to add Lake® processing via expansion slots also adds to the system’s versatility and adaptability to the widest range of mixing needs.

The full impact of the most advanced digital audio technology available has been applied throughout the CL series to deliver natural sound that provides a perfect foundation for the artist’s and engineer’s imagination. This type of sonic quality cannot be realized through specifications alone. Repeated listening evaluations and refinements by some of the most reliable ears and respected minds in the business are an indispensable part of the process. The CL series digital mixing consoles are proof that the time and effort involved have been well spent.

The Sound Is In the Details

The challenge begins right from the console’s inputs. In order to achieve the required level of sound quality, individual components, power supply, grounding, circuit layout, mechanical construction, and countless other details of the initial input stages must be selected and designed with the utmost care. Listening evaluation becomes an important part of the development process right from this first stage as well. Changing even a single electronic component can alter the sound in unexpected ways, and the tiniest variations must be noted and evaluated as development proceeds. Extreme measures have been taken to maximize AD and DA conversion performance as well, right down to making detailed spectral analyses of the AD/DA master clock and adjusting the FPGA clock signal routing so that the most natural, musical sound is achieved. Another critical part of any audio system is the power supply. Of course the capacity of the supply is important, but so are the types of capacitors used, and the grounding must be engineered to ensure the lowest possible impedance. The resultant sound is an eminently natural representation of the input signal, providing an ideal foundation for processing and effects that will lead to the final, polished sound.

In creating the best possible sound for a profusion of venues and artist requirements, sound engineers draw on their experience and imagination to make a multitude of practical as well as creative decisions. The engineer’s primary hands-on tool, the mixing console, must be able to accommodate them all. Of course the bottom line is sound quality, and this is just one of the areas in which the CL series consoles excel. They also feature some of the most advanced analog circuitry modeling technology available to add unprecedented character and shape to the sound as needed, while maintaining the utmost sonic quality.

Rupert Neve is a legend. His contributions to the fields of audio recording and production began at the dawn of the era and continue to this day in the form of microphone preamplifiers, equalizers, compressors, and mixing consoles that are the gold standards of professional audio.

Clearly Mr. Neve is very serious about his sound, so it’s an honor that he and his company, Rupert Neve Designs, have officially recognized Yamaha’s original VCM (Virtual Circuitry Modeling) technology as being the first of its kind that is capable of accurately modeling the rich, expressive analog sound they have championed for so long. With VCM technology, digital audio is at last capable of matching analog designs for sonic quality.

VCM, developed by Toshi Kunimoto (“Dr. K”) and his team at Yamaha’s innovative “K’s Lab” division, is a circuit modeling concept that effectively simulates the most detailed characteristics of individual circuit components, right down to capacitors and resistors, resulting in astonishingly realistic circuit simulations that easily outclass conventional digital simulations. But accuracy isn’t the only consideration, musicality is essential as well, and VCM modeling delivers both.

The CL series consoles come equipped with VCM models of the renowned Neve Portico 5033 equalizer and Portico 5043 compressor/limiter, both developed through close cooperation with Rupert Neve Designs. A valuable range of other VCM equalizers, compressors, and studio-quality effects is also included. You will hear the difference.

Thanks to in-depth collaboration with Dan Dugan Sound Design, renowned Dan Dugan automatic microphone mixing with its advanced algorithms is built into the CL series consoles. Setup is easy: just insert the processor into up to 16 channels for automatically optimized microphone gain distribution. Gain control is smooth and natural, as though experienced human operators were doing the mix. The system also effectively reduces feedback and comb filter issues. For speech applications, especially non-scripted situations, this allows the operator to concentrate on details other than fader operation for consistently high-quality mixes.

No detail of form or function has been overlooked, right down to how the curvature of the elegant fader knobs comfortably fit the fingers at any angle. The fader knobs even have non-slip inserts that provide ideal friction for smooth, slip-free fades. Visibility is important too, so the knob edges are sculpted to provide a clear view of the fader scale from just about any angle.

Editable channel name displays above each fader automatically switch to a larger character size for short names, and show pan and fader values as well. Below each channel name display is a color bar that illuminates in any of eight selectable colors, the same as those used in the central touch screen, for at-a-glance channel and group identification. Brightness can be adjusted for optimum visibility under any ambient lighting conditions.

Harmony in Form and Function

The sweeping form of the CL consoles is not only elegant, but it provides the best possible view of all controls and displays from the operator's position. The visual continuity from the Centralogic faders to the display is seamless. The hand rest is genuine oak with a gorgeous finish that matches the visual and tactile sophistication of the overall design.