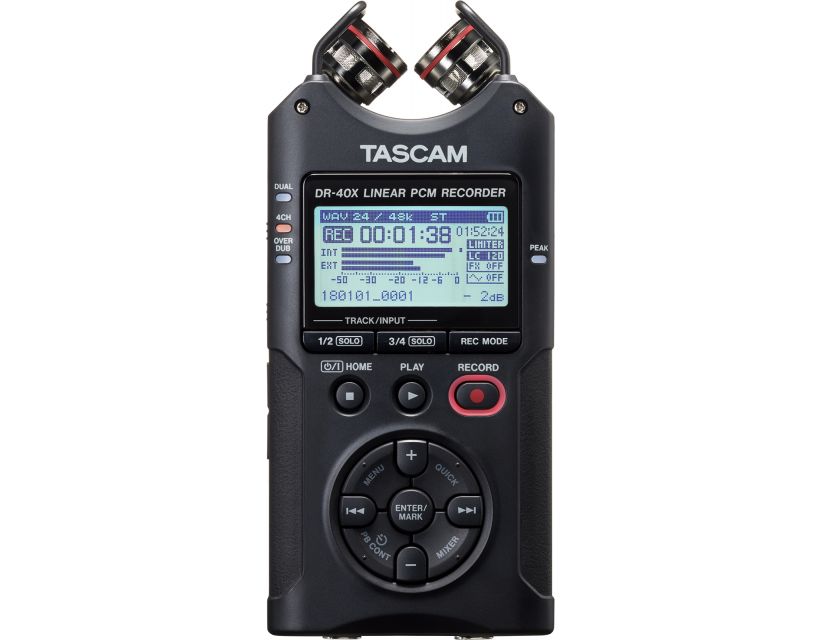 Dual Neutrik® XLR/TRS combo jacks support both mic-level and +4dBu line-level. These inputs can accept balanced microphone or line level from Mixers or the FOH console. The microphone preamp includes +48V phantom power and plenty of gain for detailed recordings with condenser microphones, as well as electret type microphones. Using the stereo built-in microphones, you can capture ambient sound of the audience while recording direct from an external console, which is ideal for capturing live performances.

DR-40X allows high-quality recording with its stereo built-in condenser microphones. Every detail is captured from small whispers to loud sounds up to 125dB SPL. These built-in microphones are adjustable unidirectional microphones for recording in an X-Y pattern for tight stereo imaging, or in an A-B pattern for a more ambient recording.

The layout of the DR-40X has been revamped to be quick and easy to work with one thumb. Operations like recording, adjusting levels, deleting bad takes and adding markers are just a button press away.

Turning your room into a studio – in a minute

Film-makers and videographers often experience sudden audio volume spikes during filming. An actor could suddenly scream, or a documentary subject could do almost anything. DR-40X has a Dual Recording mode that captures a copy of your take but at a lower level, as a safety track in case of sudden distortion. Also, Auto recording function can detect the sound input signal level and automatically start recording. The Pre-recording function with up to 2 seconds pre-record provides fail-safe protection.

Features at a glance

*1: The performance of the media may be degraded significantly if it will be used repeatedly. ERASE FORMAT by DR-40X is recommended before use.